The Prince(ss) and the Pea: A Bedtime Story

I was terrified. My mom had received a letter requesting a parent-teacher conference to address the comments written on my quarterly report card, which was attached and sealed to the letter. With her wild hair and gruff demeanor, Mrs. Bear, the head of the fifth grade’s Talented and Gifted program, was more of a “grizzly” than a “teddy”. I was on the Super Honor Roll and had perfect conduct, and I was shaking with fear wondering what I had done to warrant a meeting. My mom and I ripped open the report card and saw one line in the comments section: “Little Erin marches to the beat of a different drummer…” 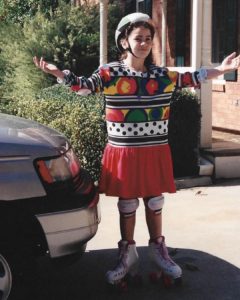 My first thought was relief — she thought I was little! At 5’3″ and already a women’s size 12, puberty had hit me early and hard. I had no idea what the rest of the comment meant, however. How did Mrs. Bear know what “drummers” I followed?! I only listened to Ace of Base and Weird Al Yankovic, and I didn’t even know if those groups even had drummers. My mom did her best to explain to me that Mrs. Bear was trying to say that I wasn’t like the other kids in my class, and I should take it as a compliment. I didn’t.

From the glitter jelly sandals on my feet to the curly pigtail-bun hairstyle on my head, it wasn’t even my sense (or lack thereof) of fashion that made me stick out. In the homogeneous Georgia suburb I lived in, my obsession with Spanish culture and perfecting the Spanish language was far from the norm. My love of ostriches inspired me to do research on a farm for my state-winning social science fair project. While other kids were in Fellowship of Christian Athlete meetings after school, I was busy building an elaborate dollhouse for my hamster named Harvey. I was embarrassed to be one of the only Jewish kids in my elementary school, and I hid the fact that my paternal grandparents relied on sign language. Why couldn’t my Nana Roza, my maternal grandma and a Holocaust survivor, play bridge and take me to the mall instead of tell me old wives’ tales in her unintelligible accent as she chopped up chicken feet for a soup recipe? Everything about me was a little outside of the mainstream (except for my love of Ace of Base), but I didn’t think anyone really noticed — especially Mrs. Bear!

In the years to come, multiple teachers would repeat Mrs. Bear’s prophetic report card comment in one form or another. Through my childhood and teenage years, all I wanted was to be normal. As an adult, I feel the complete opposite.

When it comes to social media and dating app profiles, how we express ourselves is crucial, and we’re given such limited space to do so. The key is to hone in on what makes us special, different, and — most importantly — interesting. The biggest issue I see on dating profiles is a lack of specifics. Instead of “I like travel”, what about “I took a cable car across the Swiss Alps last summer”? Substitute “Sports lover” with “Knicks season ticket holder” and “Foodie” with “Cannoli Connoisseur (Veniero’s all the way!)”. It also helps make starting a conversation that much easier.

It took me over a year to learn that one of my good friends had a black belt in Tae Kwon Do and was a black diamond skier. He’s so much more than a “finance guy from Brooklyn”, as he likes to describe himself. Sometimes, knowing and articulating what makes us interesting isn’t as simple as it sounds, though. So, ask your parents, siblings, or BFF: “What is it about me that you find most interesting, weird, or random?” They may come up with something that you wouldn’t. (For example, I just asked my good friend the same question, and she said, “I think it’s crazy you bring your own hot sauce when we go out to eat. How do you eat EVERYTHING habanero-hot?!”) Make it your mission to incorporate at least a couple of these things into your online profiles, or even work it into a conversation on your next date. Wouldn’t it be more fun and enlightening to connect over, say, your mutual hatred of coffee (I found the cure for this, BTW: I chug this stuff every day) than to talk about the latest news headline? #buzzkill! (P.S.: Check out this article I’m quoted in on dating in the Trump era.)

Plus, having such a secure sense of self is SEXY. A couple summers ago, I was going out with a laidback Tom Hanks doppelgänger who spent most of our dates sharing stories about our mutual friends or his work on Wall Street. When I first went to his apartment, though, my lil’ crush catapulted into another League (of their Own — get it?!) when I entered his bedroom, where my eyes instantly fixated on his ginormous….

PERIODIC TABLE framed and mounted on the wall! SO HOT. Hotter than the boiling point of Tungsten, even (5930º C).

In the sea of people that make up this incredible city of New York, we have got to stick out of the crowd. (I take this quite literally, as you’ll see me in neon year-round. #LBDnotme). As Coco Chanel once said, “To be irreplaceable, we must be different.”

Being an interesting person will make people interested in you. Ok, so maybe scientific studs aren’t for everyone, but the right person will love and appreciate what makes you YOU. Sharing things that make you different and interesting on dating profiles will also attract better matches. We all have specific experiences, interests, and people in our lives that have made us who we are today. None of us should go to the same beat of any drummer out there.

Here’s to making our own music… and not being afraid to have others listen to it!