I knew I was in trouble the second I stepped into Mario’s dorm room on freshman move-in day at Georgetown University. Biceps bulging as he set down his Xbox console to walk over to greet me, my heart nearly exploded as soon as we made eye contact. Though three years my junior, Mario towered over me, an Italian Catholic boy from New Jersey with thick brown hair curling out from underneath his Yankees cap. His enormous hand swallowed mine as I reached out to introduce myself to him and his mother. “You are my son’s R.A., so you will take good care of him, right?” she asked. Oh, you betcha I’ll take reeeeeal good care of him, lady…

For the next two weeks, I would eagerly await the nightly ding of the microwave in the common area outside my room as Mario would warm up a bag of popcorn wearing his usual white tank top and gym shorts.  I would then exit my room to make a trip to the bathroom, sashaying past him in the cutest pajamas I owned. The scent of buttery Orville Redenbacher’s mixed with raging testosterone was almost too much for me to handle, and I knew I had to do something soon about my crush. 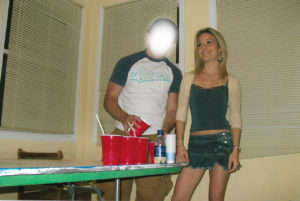 As an R.A., I wanted to instill an air of positivity amongst my residents, so I kept a “compliments box”, where people could write and submit anonymous nice messages about others on the floor that I would read at our weekly Sunday night floor meetings. I decided to write one myself: “Mario looks SO hot in those white tank tops he’s always wearing!” After reading that week’s compliments aloud to the group with the best poker face possible, I threw all the messages in the trash and headed to my room to get ready for the week ahead. A short while later, there was a knock on my door. Mario stood there, holding my crumpled up compliment. “This is your handwriting…. YOU wrote this?!” he said.

I invited him in to watch Love Actually on DVD, and the rest was history. After a semester of hiding my illicit relationship, I eventually resigned as an R.A. so that we could publicly declare our love on Facebook, a crucial milestone in 2005. We stayed together until the end of the academic year, before my broken-hearted self left to study abroad in Spain and he went on to play FIFA and make up for the freshman experience he lost while hiding out with his older R.A.

My very first love was such a powerful, special experience. And it never would have happened had I not accidentally-on-purpose let it slip that I was interested. (Who would have the guts to go after his older R.A., anyway?!) 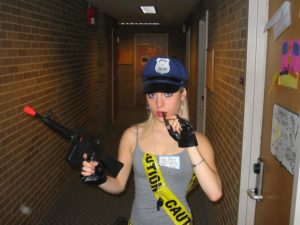 These days, there is so much fear surrounding dating. Technology has stepped in to become a buffer to in-person communication, as well. As a result, very few of us are comfortable directly expressing our interest. As a woman — and a Southern one, at that — I know it’s an old-fashioned expectation to let the man do all the courting. However, “courtship” itself, both as a term and a practice, is becoming a thing of the past.

My Nana used to tell me to “dangle a carrot” for a man if you’re interested: bat your eyelashes, coyly flirt, and tease a lil’ bit. But, these days, I say forget that – freaking hand-feed the carrot to the guy! Then, back off and see how he digests it.

If you’re not into metaphors or, for that matter, carrots (I, for one, think they’re pretty carb-y for a vegetable), the point remains: let a man know you are interested as clearly and directly as possible, and moonwalk away. The results may astound you.

As a caveat, this behavior really only pertains to knowing someone in REAL life (IRL).

Apps pose a different approach that often requires a more aggressive tactic in the beginning. Avoid the “pen pal” thing and really push to get that first in-person meet-up — yes, even if you’re the chick. (P.S. I am talking in heterosexual dating terms based on my own personal experiences). Scheduling, rescheduling, and timing issues are some of the biggest issues in dating — particularly when it comes to achieving that crucial momentum in the early stages.

My longest relationship came off of an app, and I was the one who started the conversation and arranged our first date. While, ideally, it would’ve been nice if he tried to meet me closer to my area, I picked a time and area convenient to him to make the date happen as soon as possible. I showed up on time, gave it my all, kept it to an hour, smiled a lot, thanked him, and said I had a great time and would love to see him again. (Note: Words — not “body language” — are crucial here.) Then I disappeared into the night. Pursuing any further was now on him. Since he now officially knew me IRL and knew I was interested, he could take that carrot and do whatever he pleased with it… including turning it into a three-year relationship.

Some people think verbalizing interest is terrifying. I thought the same thing until I entered my 30’s. Now, I often ask, “What is the worst that could happen by being honest and figuring out where you stand with someone?” Well, a lot of people have a quick answer to that one: “REJECTION! Duh.” I think the worst that can happen is wasting days, weeks, or even months wondering, over-analyzing, questioning, waiting… and then getting rejected. Life is short, and time is so important. Plus, have you ever left a carrot in your produce drawer for three weeks?! Yikes!

Whether you’re clueless about what to do with your “carrot” or the carrot that’s being fed to you, being honest about what you want is crucial to your happiness. And digestion. (Okay, maybe I’m going too far with this metaphor…?!?!)

In any case, let 2019 be the year where you truly seize the day: go after your dreams in both life and love. Happy New Year!