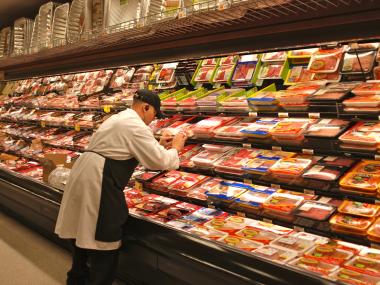 On my way home from an event last month, I had my cab driver drop me off in front of the Food Emporium next door to my building, right before it closed at midnight. I was starving, my inhibitions were down, and I had my mind set on ending my night alone with an entire pint of Halo Top ice cream. Suddenly, right after I entered the revolving door, it jammed, and I realized a drunk guy had snuck in behind me and started breathing his whisky-breath down my neck. When I broke free into the store, he would not leave my side. At one point, as he reached out to snatch the whipped cream out of my arms (AMAZING on top of Halo’s PB Cup flavor, FYI), four Food Emporium employees emerged out of nowhere, yelling at the guy to get out of the store before they call security.

“Don’t you dare mess with our girl,” one woman said.

As a couple more employees escorted him out, they asked if I was ok. “We want you to know we got your back,” one said. “You are in here practically every day, and you’re so nice to every single one of us.”

“Yeah,” said another. “You always tell me my nails look good. It makes my day.”

“You always smile and help me get the door when I’m wheeling in a big delivery,” a guy said. “We got you.”

So, in addition to giving me another craving for the dietary delight that is Halo Top, what is the purpose of this Food Emporium tale, and how does it translate into dating?

Firstly, as “New Age” as it sounds, putting out good energy into the world is contagious. It works the other way around, too. I always interview everyone for Shabbatness events in-person first, looking out for any negative energies. Body language alone can speak volumes. Even just one bitter person at a small event can bring down the entire group. If that’s the case in a group environment, imagine how affecting negativity or meanness can be on a one-on-one date with someone!

Secondly, I’m a huge believer in karma. In high school, there was a pack of girls who acted like their life’s purpose was to torture me. One particular girl was a big reason I transferred schools. I’ll never forget when she collected everyone’s chewing gum at a pep rally, then proceeded to noogie this softball-sized wad onto my head. I didn’t just lose a lot of hair that day – I lost a lot of hope. It was one of the worst years of my life, and I wore it on my (size XXL) sleeve. However, a couple years ago, when I was visiting my hometown, I ran into this chick working the register at the local Ippolito’s Italian Restaurant. All I can say upon seeing how she’s aged over the past 20 years is…. karma is a beeyatch, y’all.

Thirdly, “good” and “nice” aren’t always synonymous. The person who just donated to the ASPCA guy on the sidewalk can’t make up for kicking the stray kitten on his front stoop. At the Great Love Debate show in L.A. last August, a girl in the audience asked me how I could tell if someone was actually a “nice guy”. I told her I’ve found that the truth lies not  in how he treats me, but in how he treats others, particularly those in the service industry. Someone who is always rude to customer service people is bound to be disrespectful in other ways, and it will reveal itself.

When I started dating my first serious boyfriend, I  thought he was nothing but loving toward me, but G-d protect the waiter who presented this guy with a wine glass with a smudge on it or the barista who put too much caramel drizzle on his frappuccino. I was young then, and I tried to dismiss it, not wanting to believe his true colors would ever seep through with me. (Hey, I’m sure Harvey was nice enough to Georgina Chapman for awhile.)

Well, they did. One morning, I surprised this ex of mine by cooking him an egg white omelet before I left for work, leaving it next to a little love note I had written on a napkin. Apparently, though, I had dropped a yolk in between the trash can and the garbage liner, which he discovered later that day. He texted me photos of the damage with the caption: “Ugh – look what you did! Nice job.”

Soon after, a friend of ours offered to pick him up from the airport. I found it odd he didn’t thank him after accepting the offer, to which he retorted, “I only say thank you after the favor has been completed. Why thank someone for something they haven’t even done yet?”

I soon realized his criticism far outweighed his compliments not just to me, but to everyone. It had gradually taken a toll on me, and I realized I had lost my sparkle. I was sad. Really sad. Criticism or thanklessness can be just as hurtful as compliments can be uplifting – never underestimate the power of either.

If I had to pick one “call-to-action” for this New Year of 5778, it would be to strive to leave every person with whom you have even the most minimal interaction a happier person. Be nice to your bodega boy, your doorman, your server, and your cab driver (even if they can’t “rate” you!). What goes around, comes around. Talk down to your doorman, and wonder why your package might go missing? Try and surprise yourself with how many free drinks or apps you get by being really friendly to your bartender. And, next time you’re tempted to yell at that guy with a raging case of Asperger’s for standing too close to you at an event, take a deep breath. Smile. Be patient. You never know if that buff ginger* (*or insert your own dreamboat descriptor) in the corner is checking you out.

Kill ’em with kindness. Be wary of cutting the ties or burning the bridges – it’s a smaller world than it seems, and things can come around to bite you in the tuches. Next time something makes you angry, do what I do: print out a pic and tape it to a punching bag during a class like this one with Mr. Ray at Fit Rxn. Put your phone away, and look up. Give compliments. Next time you’re on a date, try to give the person you’re with a compliment that couldn’t easily be given to others. Rather than say, “You look nice”, try, “Wow, I am loving your stubble! Almost as much as I love that you have a dog, too!”

I ask you all to check your Uber rating on your phone now, and make it a goal to make that number higher in one month’s time. See if that higher Uber rating doesn’t just literally open Toyota Camry doors for you, but other doors as well!

To conclude with the same words Ellen DeGeneres uses to sign off on each episode of her show: “Be kind to one another. Bye, bye!”