It was the third date with my then-boyfriend Jon*, and he was coming over to my place for the first time. Soon after we entered my apartment, he crouched down in an awkward “shit-bow” pose and asked, “Ok to touch right here?”

“Ahh, “ he muttered, gritting his teeth. “So hairy. Such a nice little hairy girl, you are.”

No, we were NOT in the bedroom. Lordy, get your mind out of the gutter, as my mama would say! And no, there wasn’t much hair, either, thank you very much. Jon was meeting my dog Feeny for the very first time, a sweet little rescue terrier with fur no bushier than the budding unibrow of my youth. After Feeny confusingly sniffed his fingers, Jon whipped out a mini bottle of hand sanitizer and proceeded to douse his arms elbow-deep with the disinfectant. It was an awkward intro, to say the least.

The second time he came over, I was cooking us dinner in the kitchen when I felt him come up behind me, lightly pressing something against my back. Thinking he was about to give me an impromptu (consensual and NOT in a hotel room) massage, I turned around to thank him, coming face-to-face with a massive lint roller.

“Just figured I’d pick up a little surprise for you from Costco! Got us a 6-pack!” he said, rolling it down my sleeve. (P.S.: Our relationship would only last through the 3rd roller.)

When I had first told Jon I had a dog, he had said that he didn’t grow up with any and wasn’t a “dog person”, but he was “totally cool” with them. At the time, I am not sure either of us realized a statement like that would morph into the question he would ask further along into our relationship: “So, when he croaks, you’re not going to get another one of these things, right?”

The issue here isn’t that he was a closet cat guy (which he actually was – more on that later) – it was symbolic of something greater – something I like to call the delayed dealbreaker. Whether it’s diet, kids (whether you have ‘em or want ‘em), Shabbos observance, or something else, many people may think they’re ok with compromising or sacrificing for a new partner on certain things, but eventually realize that this very compromise is triggering a build-up of resentment or tension – the ultimate relationship killer. Another example I’ve observed: Someone who is incredibly uncomfortable with even the mere idea of consuming pork may think he would be ok with his partner eating it out of the house, but soon senses resentment brewing at the sight of his new girlfriend ripping through her mama’s homemade rack of baby back ribs with the very same mouth that would lean over to kiss him minutes later. That feeling of discomfort may, at first, seem surmountable; however, in many cases, it won’t dissipate. Unfortunately, it is this very building tension that destroys so many relationships.

Given the typical living arrangement in New York City, I’ve found that pets can be a particularly significant issue that may not occur to you right away. What if you have a phobia of large dogs, and then start dating a guy with an 80-lb. boxer who lives with him in his studio apartment? Well, the guy can always just come to your place, right? Sure, he can… until he’s come to your place 20 times in a row in the dead of winter, trekking from Williamsburg to Upper West Side, then having to run back early in the morning to let the pooch outside. So, you try to go to his place a couple times and suffer a panic attack as the dog attempts to rip the wall down from his makeshift leashed post in the corner while you two try to watch a movie. That’s rough (ruff?!) stuff for ya, right there.

Pets, children, religious observance, veganism, and his overbearing mother (who lives DOWN THE BLOCK and “swings by” DAILY, determined to rearrange your sofa pillows EVERY time) are all examples of things that could slowly chip away at a relationship. Even consistent, open communication and compromise may not be able to help. As we get older, we get to know ourselves better and better. We have to know what it is that defines who we are, and what we truly are unable to compromise on without also compromising a value essential to the very core of our being, which will lead to resentment. 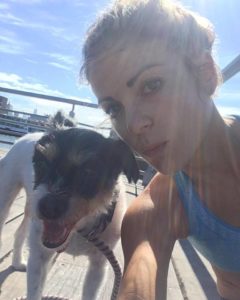 Be respectful of the person you’re with, and don’t fault him/her for being true to who he/she is. On the flip-side, don’t pretend to be ok with something you realize instantly or eventually that you’re not comfortable with. Even if you so badly wish it could work, as soon as you realize it can’t, remember that life is short. Don’t waste each other’s time. I know now that I can’t compromise on pets with anyone. I also realize that even though I’m flexible with someone else’s kosher observance, he may not be ok with my oyster obsession. Even if my fantasy of a brilliant, hilarious ginger version of Dwayne “The Rock” Johnson threw himself on me one day, I would have to let him go if he didn’t both passionately love animals AND also want to own one (or three!) with me. Ginger Dwayne will lose his ruby-red ringlets and rock-hard abs one day, but he won’t lose his dislike for doggies.

How much should you personally sacrifice for love? Only you know the answer to that. Jon eventually told me that I’d give away my dog if I really loved him. As any dog owner knows, that’s akin to asking a parent to give away his or her kid. Plus, my dog has been there for me for 10 years; I have yet to say a man has been there for even half as long. (Well, a man not blood-related to me – shout out to Dad and Drewie!)

To conclude, I wanted to share with you the number one most polarizing, “love ‘em or leave ‘em”  topic based on hundreds of Shabbatness questionnaire responses and interviews. No, it’s not gingers, hipsters, or “Jappy types” (though those are in the top five)…. It’s CATS!

Oh… did I mention I have one of those, too?! (Read about her here!)

*name changed to protect the OCD