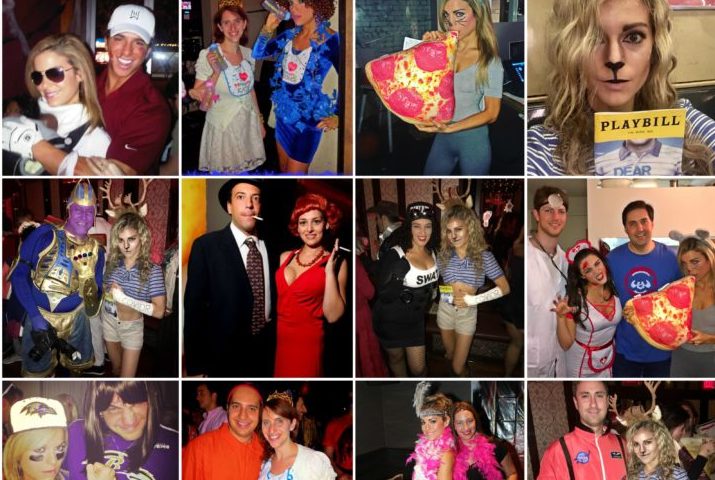 I always had a bit of a thing for Captain Jack Sparrow. On Halloween a few years ago, when I spotted a Johnny Depp-leganger across the room at a party, I couldn’t help but run over and sprinkle some fairy dust on him. I was Tinkerbell, after all. Fate?

Captain Sparrow was funny and charming, inserting silly pirate puns into our conversation about our shared interests of Western Europe and fitness. He had me “hooked” at: “Don’t worry – I’ll just challenge you to hold a plank, not walk one!” That night, we went back to his apartment to watch Drag Me to Hell (SO horrible), still in our costumes. Not sure what to expect of his apartment, I was surprised to see a toddler-sized tabby cat perched upon the largest cat castle I’ve ever seen. A copy of The Fourth Dimension lay open on his sofa next to a couple empty Hot Pocket sleeves. I wasn’t quite sure what to think of this guy, but I was intrigued. We made plans for a date the following weekend.

Four days later, I was at a gala when I felt a tap on my shoulder. It was Captain Sparrow, barely recognizable in a wrinkled tweed suit, tortoiseshell glasses, and a shellacked combover. His smooth swagger of the previous weekend was replaced with an arms-crossed slump. The change in his energy and appearance didn’t shock me as much as the change in his attitude, though. Frowning, he instantly began complaining about the cost of the ticket to the gala, his sciatica flare-up, and the itchiness of his suit. I didn’t think it could get worse until he pointed over to a friend of mine a few feet away, commenting on her cankles.

“Too bad the dating apps don’t screen for things like that,” he muttered.

I tried to turn things around, asking about his giant cat and the possibility of a fifth dimension. He just rolled his eyes, complaining that his cat was too fat (cankle-paws?) and that he had too much work to make a dent in his book, let alone ponder another dimension. Where was the happy, fun, confident Cap’n I had met less than a week before?

“Wow, funny how just a few days ago I was Tinkerbell and you were Jack Sparrow, eh?” I said, nudging him.

I’ll never forget his response. His eyes brightening, a smile forming on his lips, he replied: “Yeah! Wow, that was the best! I had so much fun. I wish I could be a pirate every day, y’know?”

If only! According to Brian Howie, host and creator of The Great Love Debate (see us live in NYC on Nov. 3rd!), Halloween is the number one night of the year to meet someone. A study by Match.com states that 60% of people feel more confident in a costume.

Why do we have to wait for one day a year to feel our most fearless and sexy?! If Captain Sparrow felt happiest as a pirate, he should work that peg leg year-round! (New York is totally the place to do it, am I right?) Sure, not all of us can show up with dreads and a hook for a hand to our day jobs, but that’s not the point – why not sport something every day that makes us feel our very best? Ever put something on, look in the mirror and think, “Meh, this isn’t really my color”, “I don’t think this flatters my shape”, or “Will pit stains show up in this?”? Well, don’t wear it! You’ll carry that sense of doubt on your sleeve – literally – all day. Feel sexilicious in high heels, but don’t want bunions? Pack a pair of sneakers in your bag, and swap ’em out, as needed. Feel best when you have a little Eau d’ AXE body spray on? Carry around a little bottle for a touch-up, guys.

So, go ahead – ditch the black, don that patterned pocket square, and step out that door TODAY with that “costume confidence”! Work it, baby!