The buffalo chicken dip went flying in the air, splattering all over my Polamalu jersey as I flew forward, banging my head on the plastic divider of the taxi. The driver had rear-ended another car at a red light, and I was now going to be incredibly late to the Super Bowl party I was co-hosting with my then-boyfriend Pat*. I texted Pat about the accident and warned him I was running late, and he replied, “Just don’t forget that buffalo chicken dip.”

I was seething. This was my eighth consecutive trip up to his place in the Upper East Side from my downtown pad, and after buying all of the supplies for our party, I only got more pissed as my banged up, blue-cheesed self schlepped everything upstairs by myself from the cab. When I got up to the party, Pat was pacing, screaming at every play as the Steelers fought to stay alive. Having grown up in the South with a father that was a high school football coach and a brother who gave everyone the silent treatment when his team lost a game, I knew to keep my distance. Could he at least have acknowledged me, though, as he grabbed the remains of the buffalo chicken dip out of my hands?!

Eventually, the Steelers couldn’t make a comeback in the final quarter. Pat stormed out of the living room, abandoning the group of people we were hosting for the game. As I cleaned up beer bottles littered across the floor and the globs of miscellaneous dips congealed into the carpet, I realized I was more enraged than Roethlisberger after that fateful final play. Over the past few weeks, I had woken up every day at 6am to make Pat his favorite egg n’ cheese sandwich before work, paid for the groceries and did the dishes, and gave myself carpal tunnel giving him massages to help with his back pain. He didn’t even apologize for eating my pint of Oreos n’ Cream Tasti D in the freezer. I realized my boyfriend may have been furious at the final score, but I found myself bothered by a completely different score: the “score-keeping” I was doing in our own relationship.

I knocked on his bedroom door, slowly peering in to find him in fetal position on the bed, moaning over the loss. I told him that I was so tired of spending, schlepping, and pretending I loved the Steelers.

He fired back, saying, “Well, I took your trash out last week, came with you to your friend’s engagement party in NEW JERSEY, and I trekked all the way to that bodega on the west side to get that Diet Snapple Trop-a-Rocka flavor you like! So, yeah, we’re even.”

Obviously, I wasn’t the only one keeping score. Many of us find ourselves trying to “keep it even” in our relationships. Pat and I were both completely in the wrong, as the bigger issue here wasn’t that he ate my coveted container of Oreos n’ Cream without asking, or that I dragged him to my friend’s party. I think, even if you really love someone, keeping score can happen subconsciously. We have to be cognizant, and we have to communicate. Most importantly, we also have to be appreciative and take nothing for granted. I know I shouldn’t have waited until I was covered in Texas Pete hot sauce, seething and suffering from Tasti D PTSD to unleash my scorekeeping resentment. Lord knows, no girl should EVER confront her man about ANYTHING during a football game, let alone the Super Bowl! (Note: Nor for at least 24 hours after his team loses.) The best couples I know naturally find a synergy and a rhythm in their roles in the relationship, and it’s rooted in mutual respect and love. They also often verbalize their gratitude.

One of the greatest couples I know told me something once that still resonates with me. Living in Newton, Massachusetts, together with a manual garage, my good friend Adam would wake up every morning to lift the garage door open for his wife Rachel, who was always the first to leave at the crack of dawn for her job as an anesthesiologist at a nearby hospital. “Wow, well, she owes you,” I remember once telling them, until I learned something I’ll never forget: “I do it everyday because I love her,” Adam said. “And I really can’t bare the thought of her opening that garage door by her tiny self, especially in this inhumane Boston winter! She doesn’t ‘owe’ me – I just want to do it.” Love this!

If you find yourself keeping score in your own relationship, consider the “why” even more than the “how” this is happening. Personally, after some deep introspection, I realized why I tend to always keep score: I am super competitive. I refuse to settle for anything less than being the best at everything, whether it’s grades in grad school or holding a plank at the gym. The price for placing such pressure on yourself is high, and sometimes, we all just need to put our egos in check. Being competitive shouldn’t translate to your love life, and I know that now. Pat never made me cook him those damn sandwiches every morning, nor did he say I had to schlep up to his place as often as I did. I wanted to “win” at the relationship, and it ultimately led to a loss greater than the Steelers faced that Superbowl XLV.

Remember that in a relationship, you’re on the same team. There are no winners and no losers, but keeping a team unified and strong does take consistent practice and training. Communication is key, whether you’re executing a fourth-down play at the 2-yard line or a plan for Valentine’s Day with your partner. For this Super Bowl, let’s vow that the only score we care about is between the Rams and the Patriots – or, if you’re like me, keeping track of the best commercials.

Tonight, take the time to thank your partner for both the little and the big things. And, if you’re unattached this Super Bowl Sunday, thank your party host or bartender, aight?!

P.S.: CLICK HERE to check out this awesome PSA I did for the Rams last season!

*Pat’s not his real name, though I do have an awesome friend named Pat! Holla! 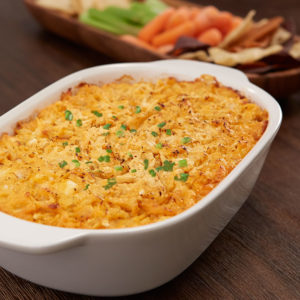 Combine all ingredients and spoon into shallow 1-quart baking dish.

Bake 20 minutes or until mixture is heated through. Stir and top with chopped green onions if desired. Serve with celery and carrot sticks.