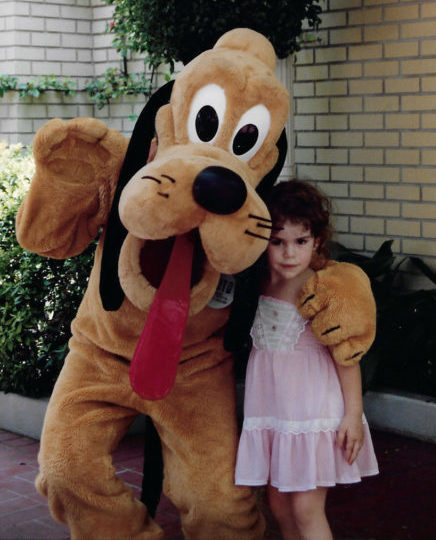 It was Valentine’s Day. My boyfriend and I had waited forever to finally do this, and the time had come. We were about to do something we had never done together before. Unfortunately, we hadn’t anticipated that, in just over three minutes, it would all be over… and we would be left with massive disappointment and the desperate desire to Purell ourselves from head to toe.

We had just gotten off the Thunder Mountain Railroad at Disney World in Orlando, Florida. What I believed would be an unforgettably romantic Valentine’s Day ended up being an unexpectedly enlightening one for my relationship.

Like so many others all over the world, Disney had a profound impact on my childhood. Aladdin was one of my very first crushes (that hairless chest! That cap that looks like a yarmulke!), and Bambi was the first movie that ever made me cry (really Walt, couldn’t you have shot Bambi’s bro instead?!). I’m also totally convinced The Little Mermaid is the catalyst behind my obsession with gingers. (And sexy seniors – hot dayamn, King Triton!)

So, after guilt-tripping my parents for taking me to Disney World only once, at age four (when I was far too young to really remember anything), they surprised my boyfriend and me with a trip to the Magic Kingdom on Valentine’s, complete with an overnight stay at Disney’s All-Star Music Resort. 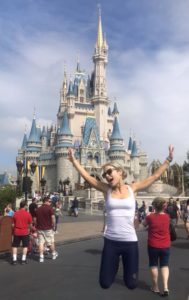 After an hour of checking-in at our resort and a long shuttle ride, we were FINALLY at the front gates! And there it was, the iconic castle towering in the distance. It was beautiful!!!

“MOVE!!! The parade is starting!” a frantic elderly woman with Dole Whip fro-yo dripping from her hairy chin screamed at us, startling me out of my wonderment. I then immediately felt excruciating pain shoot up my leg as a Goofy-adorned triple-baby stroller monstrosity rolled over my right bunion. 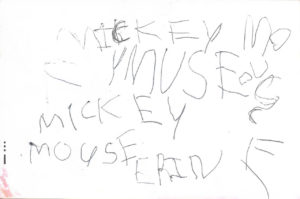 After being cheerfully shoved to the sidewalks by middle-aged Mouseketeers to make room for the Main Street parade, we worked our way over to Pirates of the Caribbean using a free cartoon map that looked like something I may have drawn during my first childhood trip to Disney. Battling brain freeze from our super sweet Dole Whip floats, we settled into the Pirates line in a damp, dark cave surrounded by crowds of children coughing, sneezing, and wiping their wet cooties along every railing and handle while exhausted parents wearily sighed and struggled to stay on their feet.

Our 75-minute wait eventually culminated in a four-minute ride watching pirate robots sing unintelligible songs aboard a boat that may or may not have been moving. At one point, it had turned into an interactive ride when the pre-teen in front of us decided to splash questionably dark, dank water in our faces. Shiver me timbers!

Taking a bathroom break afterwards to flush the potential Hep C from our eyeballs, I realized there really was no escaping the incessant music – even in the bathroom stalls. The refrain of “It’s a Small World” (or maybe “It’s a Smell World”?) competed with the sounds of little girls screaming “wipe me!” and “I don’t wanna wash my hands!” (Yes, it’s very possible the flu or some mysterious poopoo parasite is festering inside me at this very moment.)

Later, after going on just four rides in the course of five hours, we were spent, dragging our stroller-trampled feet into the one Starbucks on site to find a line rivaling Splash Mountain’s. (“Heigh-ho” blasting in the background must have been referring to the prices – $6 for a tall latte?!) Half an hour later, the barista eerily clad in blue-and-white-striped clown pants finally called my name, yelling “Bippity-boppidy-BOO!” as he placed my coffee on the counter.

The triple espresso did the trick, and we drew upon our last reserves to begin waiting in the 90+ minute line for the much-anticipated Thunder Mountain Railroad. After the three-minute, 35 mph thrill ride, we crawled out of the plastic train car. I turned to my Valentine, donning my warmest smile. “So, what do you wanna do next?” I asked with some trepidation. 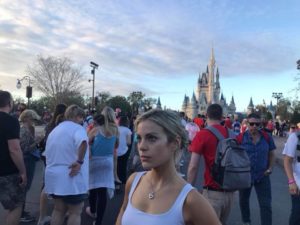 Thank the LORD! If he had said “I don’t know, maybe we can use our last fast-pass to see Gaston at the Grotto,” it would have been over. Like me, after 5 hours, he was less “MICKEY MOUSE!” and more “Meh-key Mouse.” We had an okay time, but it was refreshing to see we had both reached our thresholds at Thunder Mountain.

Look, I get it: dissing Disney seems blasphemous. Even writing this blog makes me feel like I’m committing a crime. Who doesn’t absolutely love DISNEY WORLD?! Am I heartless?! Is my soul BLACK like Darth Vader’s (who’s officially a Disney villain, btw!)? Well, whatever I may be missing, luckily my BF is missing it, too, and I think that’s what matters. Both the shared things and experiences that you dislike can be just as important, if not more so, than the things that you both DO like. Turns out, there’s even science to back this up – check it out! On a recent episode of Shark Tank, Mark Cuban even invested in a dating app called HATER centered around matching people based on what they don’t like. While I don’t think any relationship or friendship is best rooted in negativity, it can be worthwhile – and even a lil’ fun! – to think about things you don’t enjoy doing, and what it would be like to not do these things with someone! (Or, on the flip-side, to do them together, having fun while making fun! Woohoo!)

Of course, we should all make an effort to understand and appreciate the interests of our partner, and vice-versa – it’s doubtful that you’ll meet someone with the exact same likes and dislikes as you, and that would be boring, anyhoo. Many of us, however, focus on finding only shared interests, when realizing you have common DISinterest in something can be just as powerful of a connector!

Looking back on my earliest relationships, I realize how hard I tried to like as many things as possible, wanting so badly to connect to people I was meeting. After trying hard to connect to a bass guitarist, a music manager, and a guy who thought he could sing, I now know that my beshert will definitely be someone who does NOT love standing shoulder-to-shoulder for hours at a deafening concert. Recently, I met someone at a breakfast event, bonding over the two of us being the only Jews there who loathed the mere sight of lox on the buffet. I’ve set up couples who’ve totally bonded over a hatred of skiing, cats, sports, and sci-fi, and it’s pretty powerful stuff.  Personally, I’m still looking for someone who secretly harbors hatred for Harry Potter,  but haven’t had luck yet… (OMG. I better not say anything about Game of Thrones, or I’m really a lost cause.)

So, next time you’re on a date, instead of quickly dismissing something you both see as negative, see the value in sharing a similar perspective. And, hey, if it doesn’t work out, you can always check out the HATER app, right?!