“I’ll bet you $20 that your boyfriend’s cheating on you, and I’ll prove it to you with THIS!” my friend Derek* exclaimed, whipping out a Kodak disposable camera from his bookbag as he slid into the seat next to me on the bus. “In fact, I’ll do it this morning and have the photos of the two of them making out all over the place for you by tomorrow.”

I had befriended Derek and met Jason, my first boyfriend, riding the magnet school bus, which drove a group of us students from Johns Creek, Georgia, to two different charter schools in the city. Derek, a skilled skateboarder with a penchant for punk rock, JNCO jeans, and heavy eyeliner, and Jason, an adorable band nerd that was never without his Harry Potter glasses, black leather jacket, and personalized trumpet case, studied at the arts and music school a short drive from my international baccalaureate school. 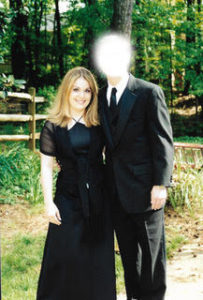 Jason had been my official boyfriend for over five months, and I was head over heels. With his all-consuming obsession with nothing but jazz, his trumpet, and Star Wars, we had absolutely nothing in common, but it didn’t matter. I was 15, and he had swept me off my feet by slow dancing with me at Homecoming to NSYNC’s “This I Promise You” as he sucked my face in front of all my high school bullies. We spent every weekend making out in my basement while “watching” The Phantom Menace or “listening” to Wynton Marsalis (with the occasional interruption from my mom tiptoeing down the stairs with a plate of cookies). Oh, teenage love.

Then, soon after he gave me a big white teddy bear with “I Love You ” embroidered on the paw for Valentine’s Day, a few of my bus buddies told me he was cheating on me with a girl at their school named Amanda. I confronted Jason calmly, asking him to just tell me the truth. While an admission of the betrayal would make it impossible for me to stay together with him, I told him that I would still respect him and try to be friends. In any case, he denied it completely and said I should trust him, not my friends. Somehow, I couldn’t shake my suspicions, so when Derek offered me the $20 bet one morning when Jason wasn’t on the bus because of “early band practice”, I had to do something.

“Forget the camera – I’m coming with you,” I told Derek, as I followed him off the bus at the arts and music school. It was pouring rain outside, and my heart was beating through my chest. I had never been inside this school before, and Derek and two other bus buddies led the way for me, straight to the band room. I took a deep breath and peered through the open door to see Jason sitting in a chair, his beloved trumpet cast off carelessly to his side, a frizzy-haired brunette in an oversized t-shirt and stretchy purple stirrup pants (FYI: this was 2001, NOT 1991), clutching her flute with one hand and the back of his head with the other.

“YOU LYING CHEATER!” I screamed, storming toward them. Not knowing what to do, I semi-slapped the side of his arm and spit my gum at him, which landed perfectly atop his head. Amanda, completely unfazed, said she didn’t care that he was a cheater and that she and Jason were in love. In fact, they were even going to PROM together in a few weeks! Devastated, I eventually found myself in the front office of the school, bawling my eyes out as I waited for my mom to come pick me up. Translating my heartbreak into pages and pages of cringe-worthy poems in my journal, it took me months – maybe years – to fully get over it.

I recently stumbled across these journal entries from exactly 17 years ago (see below) the same night I embarked on a Sex and the City movie marathon, and I got to thinking. What constitutes cheating in an exclusive relationship today, particularly given the role of technology? Is it remaining on dating apps when you’ve promised to delete them? What if you’re actively chatting with people on them, but not meeting up? Is having an emotional affair the same as a physical one? In my personal opinion, yes, yes, and yes, but we all have different thresholds, and the answer to these questions may depend on what you’ve established with your partner through clear communication. (Make no assumptions, especially early on!) If you have to ask yourself if something you’re doing is wrong, it probably is. If you can’t imagine your partner doing it to you without it hurting you, then that says something, too.

Cheating in any capacity is pretty horrible. It’s one of the worst pains you could ever inflict on another human being, yet people do it to those they love the most – even after giving them a damn “I Love You” Valentine’s teddy bear! So… DON’T DO IT! However, it happens, both in real life AND in Sex and the City, as my recent movie marathon reminded me.

*SPOILER ALERT* In Sex and the City 2, the less amazing of the two Oscar-worthy films, Carrie Bradshaw shares an impromptu smooch with her ex Aidan after running into him in a shuk on a girls’ trip to Abu Dhabi. Though madly in love with her hubby Big, who was at home in their NYC mansion halfway around the world, she messed up and regretted it immediately. So, what did she do? After spillin’ the beans to her gal pals, she picked up the phone and called Big right away to tell him everything. WTF.

Many people are divided on this “kiss and tell” dilemma, but I take a pretty firm stance. If you’ve had one singular slip up like Carrie’s Abu Dhabi date with Aidan, I would shuk the F up. If you love your partner deeply, and you did something you regret once and only once, with no attachments and no future impact on your relationship or the way you’ll feel or act going forward, then I think it’s best to not disclose it to anyone but your therapist. (Or you can always write a poem in your diary.) If you are the kind of person who cannot live with yourself without revealing your one-time transgression, then be prepared for the possibility of losing your partner or irreparably severing the trust you once shared. Maybe it’s lingering high school band room PTSD, but I would never be able to stay with my partner once our trust was broken. Even if I wanted to forgive, I really could never forget, and it’s not fair to either of us to live in a relationship that’s forever broken. Of course, you can avoid this entire dilemma by NOT CHEATING, right?!

In many cases, it’s not the actual act of cheating that is the most serious part of the transgression – it’s the reason(s) behind it. A lack of connection or intimacy (see: Steve and Miranda in the first Sex and the City movie), growing resentment, a void, or overall dissatisfaction with the current state of your relationship could all be triggers. Alternatively, it may have nothing to do at all with your partner or the relationship itself, but rather it could be something that you’re struggling with privately that only professional help – and not a lil ol’ dating blog – can address. So, while I know there are a range of reasons one may stray, can someone please tell me why TF Diane Lane cheated on Richard Gere in Unfaithful (another Oscar-worthy film!)?! (Ok, so Olivier Martinez is really hot, but still.)

For the sake of not turning this blog entry into a novel (or one of the endless poems of my youth), I can’t delve into every aspect of this sensitive subject. However, to conclude, I must say: if you learn your partner is having a full-fledged ongoing physical and/or emotional affair, run for the hills like I ran out of that high school band room 17 years ago! (But, maybe without hitting anyone and/or spitting gum into his/her hair.) On the other hand, if you’re the one with a flirty flutist that’s turning into much more than a furtive fling, take it from a gal who has been there – literally – and come clean! You can’t keep living a lie, or someone will eventually get a snow globe to the skull…

*Names have NOT been changed! 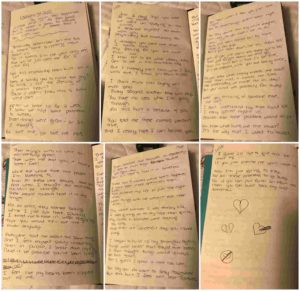