See It For Yourself

My Mom: The Masterpiece

See It For Yourself

The day had finally come. I was 17. I had waited a bit longer than most of my friends, and I wasn’t the least bit nervous. In fact, I was anxious to just get it over with as soon as possible. It was time to take my driver’s license exam! 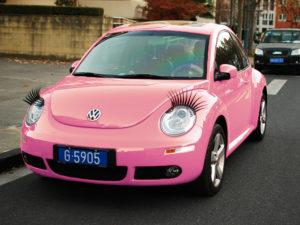 With my new shiny Georgia license in hand, I couldn’t wait to get a car of my very own to drive the lengthy daily commute from my hometown of Johns Creek to my high school in Sandy Springs. All I wanted to drive was a Volkswagen Beetle. As the fullback on the soccer team and a diehard Atlanta Braves fan (Go Javy Lopez!), no one would’ve guessed I wanted my bug to be bright pink, complete with a fresh daisy in the dashboard vase. With savings from my Bat Mitzvah and my after-school tutoring job, I had everything lined up… until my parents said there was no way in heck a child of theirs would ever buy a German car.

As the granddaughter of Holocaust survivors, there was so much I wanted to know about my roots, though it was something my family didn’t discuss. I lived in a small suburb in Georgia with very few Jewish people, and there was a lot that I needed to learn beyond the walls of my high school. When I heard that neighbors of ours were selling their daughter’s VW, I thought I had found a solution – I could avoid buying the car from the manufacturer! “No, Erin, ” my parents told me. “There will be no German car in our driveway,” my parents said. “End of discussion.”

So, I ended up with a silver 1996 Volvo S70 and feelings of confusion, anger, and fear. Despite a dented bumper, a sagging ceiling, and a broken driver’s side window, the Volvo had dependably gotten me through the next few years of driving on the intimidating Atlanta highways. (While it kept me physically safe, I’ll admit I was emotionally shamed every time I pulled up to the McDonald’s drive-through and had to step out of the car to order my Super-Sized Filet-O-Fish value meal.) My Volvo didn’t outlast my conflicted feelings about Germany, though, which would persist for years to come.

My parents had never had passports, and traveling outside of the southeastern U.S. wasn’t part of my childhood. While I loved our annual summer road trips to the redneck riviera of Cape San Blas, Florida, I longed to see the world. I internally grappled with the growing guilt of my desire to visit the very country at the root of so much conflict in my own family: Germany. I couldn’t explain it – I just needed to go. I needed to see it for myself, by myself. 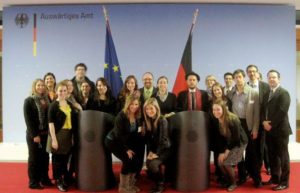 I had heard about a fellowship called Germany Close-Up funded by a grant from the German government’s Transatlantic Program, which provides an opportunity for North American Jews to visit Germany for a week. The packed itinerary would expose participants to Germany’s past and present, allowing each person to form his or her own opinions through meetings with government officials, visits to memorials and former concentration camps, and activities with the growing Jewish community in Berlin. I applied and was accepted to join a group from the American Jewish Committee in November of 2012. It would be impossible for me to express in words what I felt that week in Germany and what I feel today, and it would feel particularly inappropriate for me to try to do so in a dating blog, but I can say it was incredibly important for my own personal development that I go there myself. To say it was life-changing would be an understatement. 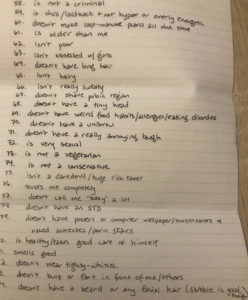 This past week, I was back in Berlin. I had been selected as one of 20 alumni of Germany Close-Up to return on a special trip to commemorate the 10th anniversary of the program. While I was abroad, my mom stumbled across one of my high school journals where I listed qualities that I wanted to find in the man I would marry one day, and she WhatsApp-d me some screenshots (see right!). The 87 (!) traits I listed made me simultaneously smile, cringe, and think. Sure, I definitely still have a thing for older men and can’t handle “lots of back hair”, but there were other traits that made me realize something: “No long distance”, “no kids”, and “NOT a creative, artsy-fartsy guy” were all written based on what I thought I knew of myself rather than any personal experiences.

So… I’m currently in a bicoastal relationship with an L.A.-based actor who has a daughter. Now that I’m in my 30’s, I believe even more strongly that we still have so much to experience. Sure, while many of us may feel like the experimentation phase of our 20’s feels long over, there is still so much we all have to learn about ourselves, each other, and the world around us. After the profound week I just had again in Germany, it feels incredibly belittling to return home today, switching my mindset to write a dating blog. My trip, however, did make me reassess the way I’ve lived and loved.

On my nine hour flight home from Germany tonight, I decided to write a new, updated list of my own – not “checkboxes” or “dealbreakers” (which I believe should be minimal), but things I consider incredibly important based on exactly what I’ve experienced personally in conjunction with what I’ve learned about myself along the way. It’s not a final list, and I look forward to adding to it and amending it, too. So, why

don’t you bust out a paper and pen – which is SO much cooler than typing it, by the way – and give this lil’ exercise a shot yourself?!

As I settle back home in NYC tonight, I’d like to leave you with a quote that really resonates with me: “The eyes are useless when the mind is blind.”