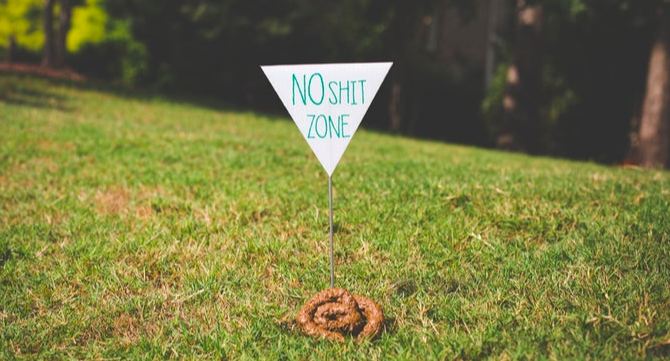 I’ve been through some sh*t recently. And that sh*t hit the fan in more ways than one.

I love my parents, but I don’t love that Orlando is their home airport. My flights between NYC and MCO are filled with a combination of angry New Yorkers, cranky kids, and Disney stuffed animals. My return flight to NYC after spending Thanksgiving with my family was one of the most traumatic travel experiences of my life. 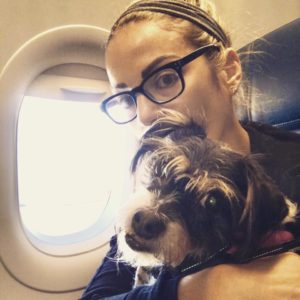 Feeny, my sweet, wonderfully trained 13-year-old rescue, has flown multiple times with ease. Toward the end of this particular post-holiday flight, he started panting and shaking. Upon the descent, he became very overheated, and his shakes turned into full-blown convulsions. Something was wrong. And that something ended up being… explosive, nonstop diarrhea.

It didn’t end upon landing, and I was forced to exit the plane first, leaving a trail of turd in my wake. Forced to sit on the jetway until everyone deboarded, I wanted to cry from embarrassment and concern for my dog, but couldn’t even use one of my tissues because they had all been used to stop the sh*tstream. Then, the worst happened: each person who passed me either said something horrible to me, gave me a look from hell, or did both simultaneously until I cried my contacts right out of my eyeballs. Simply put, I was sh*t-shamed.

And… I kinda deserved it. Well, maybe not so literally. But there was some sh*t in my life that I was ashamed of, and it was time to doo-doo something about it.

This past summer, I hurt a friend who I love, and it was almost entirely my fault. The worst feeling in the world is hating yourself for something you’ve done, especially if what you’ve done hurt another person. And, if that other person happened to be an amazing guy you’ve known for years, it feels even worse than having dog sh*t in your hair.

There is really nothing more upsetting or frustrating than being mad at yourself. This applies to everything: from your words, actions, plans and decisions in either your personal or professional life. If someone hurt me deeply, but I’m proud of how I handled it, it’s so much easier to move on from the pain. In fact, as recently as two months ago, there was a guy who filled my lil’ heart with so much hope… only to stomp it out with a ghostly abruption I’ve never experienced in my life. I was, however, proud of my actions and words throughout the entire experience, and I was able to fully get over it fairly quickly — and a few classes at The Kickbox Haus definitely helped!

We all know the saying: “You can’t control the actions of others, but you can control your reaction,” and it’s so true. My present sh*t-suation was so consuming for me mainly because of how disappointed I was with my actions, not his reaction — which really hurt me. The solution to helping yourself get through a conflict with yourself is complicated and involves more than just analyzing your own problems; it also involves eventually directly addressing the affected party in person. Over the course of the past few months, I had been working on the former issue, but it was time for me to do the latter. Feeling literal sh*t on the outside of me while feeling like sh*t inside of me was definitely a breaking point. If there was ever such a thing as a sign, that flight was it!

Last week, thanks to a lot of potent egg nog and encouragement at an ugly sweater party, I reached out online and asked to meet up in person. Fortunately, the message was free of grammatical errors and bizarre auto-corrects. (Which was particularly admirable as I walked into a scaffolding pole shortly before sending. What was IN that egg nog?!) 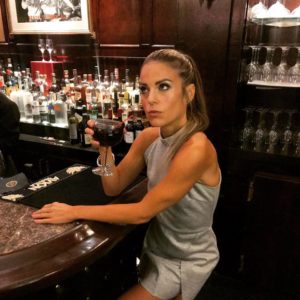 Nonetheless, my message was ignored. I would need some (more) vodka-induced valor to make a meet-up happen, and I would have my opportunity at yet another holiday party a couple days later. The night of the party, it took one dirty martini to be able to wave to him across the room. After two, I made up my mind that I was ready to march on over. After four, I actually did it. And for almost five hours, I apologized, I argued, I cursed, I cried, and I may have choked on an olive…. But I did it. I meant (and remember!) every single word of my very teary, heartfelt apology, and hearing his side definitely helped me get more clarity. While I believed I was 70% responsible for what happened to our friendship and he was 30%, he insisted that I was 100% and he was 0%. We shook on 90-10, which probably means I should never, ever go on Shark Tank. In any case, you’ve got yourself a deal, Mr. Wonderful! I woke up the next day at noon feeling like a new, happier (if hungover, again) person.

So, why didn’t I do it sooner? I just couldn’t. I felt ashamed, scared, and mentally unequipped to deal with anything emotional on top of personal and family health issues and a drawn-out break-up after four years. I also firmly believe apologizing when either or both of you are in the acute emotional state of a conflict isn’t effective. I work with a lot of clients experiencing the break up of a relationship or friendship in which one person carries the majority of the blame for something and is eager to apologize and “make it all better.” I feel that those of us who have hurt others by our own direct actions actually deserve to feel the anxiety and suffering of being unable to achieve absolution right away. In many instances, an immediate apology shouldn’t be accepted, and if it is, it is highly likely that there is too much damage to truly make amends at that point. An unbiased middleman can be helpful in relaying a message or two along the way, but only as means to an end of eventually being able to talk in person. The same goes for relationships: if you hope to get back together with someone you’ve wronged, I feel it’s important to allow for some time apart when emotions are highest, work on yourself, then assess the opportunity to communicate at a later time. Yes, I feel that I should’ve apologized immediately, but I don’t think forgiveness would’ve even been considered at a time of so much emotion on either or both sides, and I don’t think I would’ve known what to say and how to say it. It may be hard to know when the right time is to talk directly with the person in question, but I do know the right time is not right away.

I don’t really know if time heals. But it helps. We don’t need a holiday like the New Year or Yom Kippur (combined with liquid courage!) to urge us to make amends or reassess our lives. But, it doesn’t hurt to have an extra nudge, so take this unique time that marks not just the end of the year, but also the end of a decade, to do a bit of a self check-in. So many people take the New Year to make resolutions to physically lose weight; well, I think it’s important to consider if you have any weight to lose mentally. Trust me, it’s not fun to admit when you’re wrong about anything (especially in a public blog!), but it’s worth it.

While I can’t control his reaction to my actions this past week, I hope he’s ok (and doesn’t totally cringe if he reads this). I don’t know if he fully forgives me or if I even fully forgive myself, but at least he knows how I feel. I no longer feel like sh*t (nor does my dog!), and I do know I will do my best to never put myself in a similar sh*t-suation again.

Check out my “Top Ten” tips below for getting through your own conflict with others and/or yourself. And cheers to a Happy (NOT crappy!) New Year!