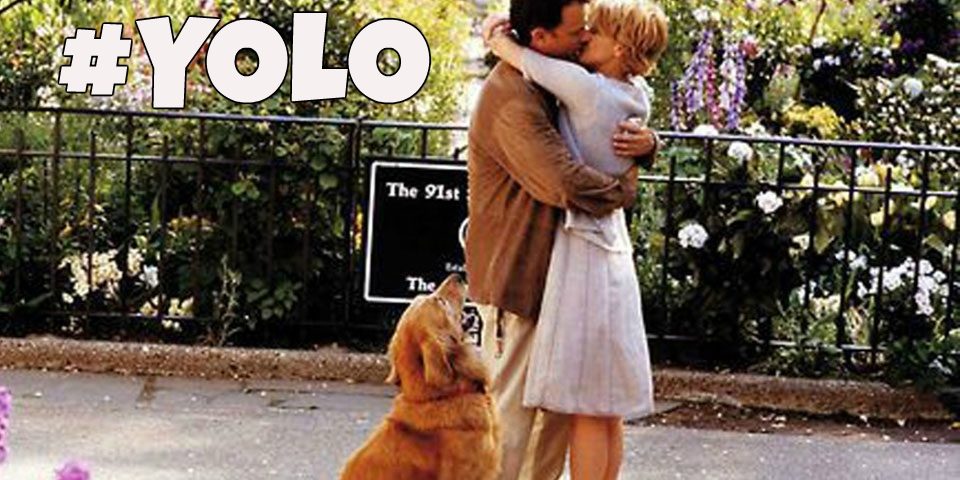 It had been a rough day. I was drained and down, having spent the last few hours of a 12-hour day at my new job repairing the damage from an accidental “reply all” email referencing a co-worker’s psoriasis.  To top it off, I had dropped and cracked my phone, had some questionably fishy sushi for lunch, and walked into my East Village apartment to find a mouse writhing on a sticky pad on the floor.

It was a Friday night, and I had been in New York for less than two months.  I was broke, bloated, and burnt out, and the last thing I wanted to do was go out. In fact, I decided to declare it a “Tom n’ take-out” night, ordering Mexican off Seamless and putting on You’ve Got Mail. Right when Meg Ryan scrunched up her face at the site of Tom’s dog Brinkley in the concluding Central Park scene, my friend Leo called, begging me to come out and meet some of his friends at a birthday party barbecue in Nolita. I looked down through teary, puffy eyes (Meg had JUST gotten stood up at Cafe Lalo minutes earlier) at my quesadilla-stuffed, protruding belly, guacamole spattered on my Georgetown hoodie. Then, it hit me: WTF? I’m new to New York, I don’t know many people here yet, it’s Friday, and I should not be sitting here right now. Worst case, Tom Hanks will still be here when I get back. (I just hope no more mice will be.)

Fast forward to an hour later (or however long it took me to transform myself), I was on a rooftop patio in Nolita, utterly captivated by the ginormous biceps of this cute, curly-haired, super Jewy guy playing beer pong. I walked over to him, raising my Solo cup, and called out, “L’chaim!”

I dated this man for almost three years. If I hadn’t wiped away my tears and guacamole stains and gone out, I wouldn’t have met him. Sure, it all ended with a tragic, teary drawn-out break-up over tea (which I had to pay for) at Argo in Union Square one gloomy winter night, but I wouldn’t trade my most serious relationship to date for anything in the world.

So, what’s the point of this little story? We all have rough days, or even rough weeks. Everyone needs a night off. But when you realize you’ve started making excuses and/or can’t even remember the last time you’ve gone out, I want you to ask yourself this: “What are the ten best experiences I’ve had in my life so far?”

“Oh! Number three was that Columbus Day weekend I spent binge-watching Breaking Bad while trying that new frittata recipe from HungryGirl.com!” said no one EVER.

Are you really too tired, too stressed, too depressed, too pissed at the weather, too PMS-y, or too upset the Giants lost to get out of your apartment and socialize? Going out is often like working out — it can appear daunting initially, but it’s doubtful you’ll regret doing it afterwards. (Disclaimer: this pertains to going to events in which you know you have a good chance of enjoying the people and the place, i.e., not a random club with a horrible ratio, a sky-high cover, and a ridiculous line outside in the middle of February… unless that’s your thang, of course! Again, just like exercise, if you know you HATE rowing, don’t sign up for a class at Row House just to get your exercise in, or you’ll start to have a negative outlook on fitness. The same goes for going out. You do YOU, baby!)

Life is short. And yes, it can be tiring, particularly in New York. Cut yourself some slack — just don’t sever the hell out of it. You’ll notice I reference this quote often, but it’s just SO true: in the words of Wayne Gretzky, “You miss 100% of the shots you never take.”  #YOLO!

Check out my favorite celeb “how they met” story here. Had she not gone out to eat with a group of girlfriends that night in NYC…